The 2021 fire season in the West Oregon District began on Wednesday, June 16th.

On Wednesday June 30th, 2021 the West Oregon District moved into a HIGH fire danger with the following Industrial Fire Precaution Levels (IFPL):
WO1 – I (one); WO2 – I (one); WO3 – II (two)
For a map of the IFPL zones, click HERE

Fire Season in the West Oregon District ended Monday, October 12th. As everyone in Oregon knows, 2020 fire season was one of the worst in history.  Numbers compiled by the Oregon Forest and Industries Council, of which we are members, said that 1,002,943 acres were burned following the unprecedented wind event on Labor Day. The is estimated to be 346,120 acres burned on private lands.  Over 650 employees and contractors of private landowners were actively engaged on these fires.  Those landowners and contractors were able to provide 357 pieces of equipment to fight the fires. This personnel and equipment contributions are often in-kind and part of Oregon’s unique “complete and coordinated system” for fighting fire in Oregon.

At Starker Forests, our lands were lucky to not be impacted by these Labor Day wildfires.  We join our fellow Oregonians in mourning the loss of human life, homes, rural community infrastructure, forests, and wildlife.   We believe that there are practical solutions and actions to put out dangerous fires, protect against future catastrophic fires, and restore and rebuild communities.  We believe that active forest management is a solution for both climate and fire issues. Active management protects the environment by helping forests adapt to changing conditions, reducing massive carbon emissions from wildfire, and creating renewable building materials that store carbon. At Starker Forests, this means that we manage forest fuels to reduce fire risk, we grow and harvest trees to be manufactured into wood products that store carbon, and we fight fires aggressively when they start.

2020 Fire Season has arrived. Beginning today (7/6/2020) the State Forester, with the Oregon Department of Forestry (ODF), has declared Fire Season in effect at Industrial Fire Precaution Level (IFPL) 1 and the start of Public Use on the West Oregon District.  Most lands owned by Starker Forests are located in the West Oregon District.  The ODF Fire Restrictions and Closures page contains links to public and industrial fire restrictions. The Industrial Fire Precaution Levels (IFPL) regulate how operations are conducted on forest lands protected by ODF.  West Oregon ODF Public Regulated Use Restrictions describe restrictions to public use of lands protected by ODF and all forest lands within one-eighth of a mile. 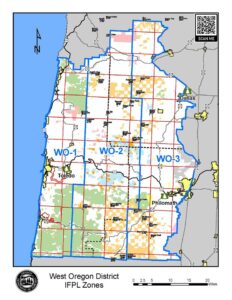 For 2020, to add flexibility in applying the Industrial Fire Precaution Level (IFPL) system during Fire Season, West Oregon District went from two zones, SL-1 (Coastal Strip) and WO-1 (Coast Range and Valley Fringe), to three zones and renamed them WO-1 (Coastal Strip), WO-2 (Coast Range), and WO-3 (Valley Fringe). For industrial forest operations, this map will show the current IFPL levels.

What does all this mean for our public recreations users? Our forest operations are carefully regulated so that we don’t start fires while we are working in the forests during fire season.  Public users have responsibilities as well. Most importantly, smoking, fireworks, and campfires, of all kinds, are prohibited on our property.  Mowing of dried, cured grass is restricted.  Motor vehicles are only allowed on improved roads, free of vegetation. Sky Lanterns and Target Practice with tracer rounds or exploding targets is prohibited.  As users of the forest should report smoke if seen to 911 and our office.  We won’t be having any prescribed fires during fire season. While our gates are locked during fire season, forest workers and others accessing Starker Forests property using motor vehicles are required to carry one shovel, one axe or pulaski, and one gallon of water or a 2.5 lb. ABC or larger fire extinguisher.

ODF provides a great overview of the work they do, both for and with landowners: “The Oregon Department of Forestry is Oregon’s largest fire department, protecting 16 million acres of forestland. This is just over half of Oregon’s forestland base and is an asset valued at about $60 billion. The work of ODF’s Fire Protection Division maintains a stable environment for ongoing investment in forest ownership, and protects public safety and signature natural resource values that benefit all Oregonians. An emphasis on prevention, and on suppressing fires quickly, while they are small, ensures cost-effective results for communities, the public and forest landowners. The Division’s core mission is to provide protection through a complete, coordinated system that incorporates agency resources with those of private forest landowners, federal agencies, other state agencies, city fire departments and rural fire protection districts. Fire prevention, detection and suppression are accomplished through 12 protection districts, including three private associations called Forest Protective Associations. Landowners play an essential role in supporting and enhancing the Fire Protection Division, which is financed through a blend of public and landowner dollars.”

At Starker Forests, we are part of the complete and coordinated system of fire protection by providing crews, fire trucks and important firefighting equipment such as bulldozers via our logging contractors. If there is a fire, we are “all hands on deck!”  Oregon’s completed and coordinated system for fire protection is unique when compared to other states in the US.  This system is successful at extinguishing 98 percent of fires at 10 acres or less.  All forest workers and landowners are proud of this statistic.

Fall is a time for active forest management to perform prescribed burning operations.  This is also known as slash burning.

Before lighting, we must receive permission from the Oregon Department of Forestry and weather conditions must be appropriate for burning slash piles. Prescribed burns happen in western Oregon usually during the months of October, November and December.

For a short article on slash burning, check out this blog.

Good morning! Fire season has ended. All gates that will be open for drive-in hunting are open now. Master Hunter and Handicap combo locks are on. Do not block roads, gates or drive on dirt roads. Please be courteous of others when you are out hunting on Starker Forests lands.

Some Tree Farms are not open for drive-in due to the long fire season. Walk-in access is allowed.

Be safe and have fun!

Despite the rain, we are still in fire season.  Open fires are prohibited.

**FIRE SEASON IS IN EFFECT**
Due to rising fire danger, the Oregon Department of Forestry‘s West Oregon District has declared public fire restrictions. This is in addition to industrial restrictions already in effect.
Public use restrictions are based on activities most commonly associated with fire starts in the past. They include, but are not limited to:
No open fires except at designated campgrounds
No fireworks
No mowing of dried grass between the hours of 1 p.m. and 8 p.m.
Non-industrial chainsaw use requires a waiver from an ODF forester
Smoking is not allowed while traveling except in closed vehicles on improved roads
ODF officials urge members of the public to be prepared and take precautions to prevent fires, such as carrying a shovel and either a fire extinguisher or at least one gallon of water when traveling in the forest.
These restrictions apply to lands in Lincoln, Benton, Polk and parts of Yamhill County protected by the Oregon Department of Forestry. For a complete list of restrictions that are in place at any given location, go online to ODF’s statewide fire restrictions and closures page at www.oregon.gov/ODF/Fire/Pages/Restrictions.aspx. Questions may also be directed to local ODF offices.

**FIRE SEASON IS IN EFFECT**

This impacts ODF-protected lands in Benton, Lincoln, Southern Yamhill and Polk counties.
Here are the restrictions currently in place:

– Burning of debris, whether in burn piles or burn barrels, is not allowed at anytime.

– Use of tracer ammunition is not allowed at anytime.

– Use of exploding targets is not allowed at anytime.

– Use of sky lanterns is not allowed at anytime.

– Use of fireworks on forestlands is not allowed at anytime.

The fire danger level for the public will be “LOW” (green) and the Industrial Fire Precaution Level will be I (one) for the whole district.

Fire season and regulated use are over. We will start opening gates for drive in hunting starting today. The gates will be open as we get around to different areas. Please be patient as it may take a couple days to get to them. All the gates that are going to be open should be open by Friday afternoon. Please make sure you have your permits to access our lands and remember to be safe and courteous to others!

Fire season is hanging on thanks to the dry weather.

Fire season is coming to a close but the Oregon Department of Forestry has not yet declared an end to fire season.  We expect that to take place during the first week of October.

Red Flag Warnings continue across most of Oregon today, as well as continued extreme heat warnings and air quality alerts. Conditions on the ground remain ideal for new fire starts and extreme fire behavior on existing fires. Human-caused fires have continued to be an issue on Oregon’s forestlands. Please do all you can to help prevent human-caused wildfires. Know and follow the fire restrictions and closures for where you are located or will be traveling. To find that information on ODF-protected lands, go to http://www.oregon.gov/ODF/Fire/Pages/Restrictions.aspx.

Fire season is in full swing.

Due to increasing fire danger the Oregon Department of Forestry has, on July 17, 2017, ordered new regulations on forestlands protected by the department in our area.  All Starker Forests lands are covered by these regulations.

Under this order it is unlawful to be in violation of the following restrictions:

June 12, 2015
A ban on all open and backyard burning will go into effect on June 12 in Linn, Benton and Marion counties. The restrictions will extend through Oct. 15 or later, depending on fire danger.

Gates that will open for hunting season, will be open Saturday, Oct. 2, 2021.

Visitors to Starker Forests are asked to comply with the following:
– All visitors to Starker Forests must obtain a free  recreation permit. Permits are  available by phone by calling our office. If you are getting a permit for the first time, you are required to visit our office to view the map and go over rules and regulations.
– No camping or campfires.
– Do not park where your vehicle will block a gate or where there is no parking available.
– Practice “Leave No Trace” measures and take your trash with you.
– Building of trails on Starker Forest is prohibited.

We do not issue permits for mushroom harvest.