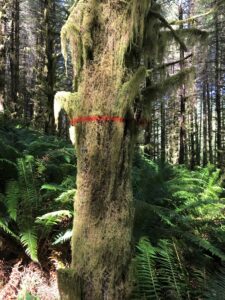 For the past few weeks my partner and I have been marking thinning stands. This means that we are using paint to mark trees that will be removed either due to crowding, defect, or suppression. Doing this allows the stronger, healthier trees to have more room and resources to continue to grow until the entire stand is read 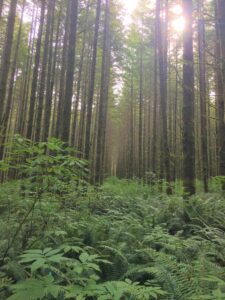 Thinning is something that occurs naturally in forests, much like natural selection, the dominant trees will eventually overtake the weaker trees thinning simply helps to speed up the process!

For my first full post about what all I’ve done for Starker Forests this summer as an intern, I will walk you all through some of the training we started the summer with.

In the opening week of work, we went through standard CPR and First Aid training in order to receive our certification cards. After that, we dove deeper into more hands-on training focused on wildfires.

In the past, Starker has sent the summer crew to a wildfire course put on by a larger company, however, due to COVID-19, that was not possible this year. Instead, an in-house fire training program was put on by members of Starker Forests to ensure the entire crew would be ready in case of a fire event. The multi-day fire training involved the physically demanding job of digging fire line, as well as more technical aspects like learning how to lay a fire hose and run all the pumps.

As we have progressed later in the summer, we’ve spent small amounts of time reviewing fire procedures and looking over the three fire trucks the com 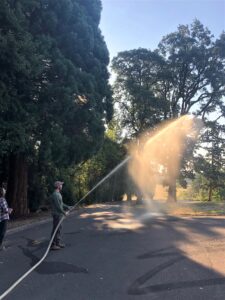 pany owns. The last time we did this, I got the opportunity to run the hose, as you can see in this picture. We tested it for holes and made sure all the truck pumps ran smoothly.

my name is Madelyn Neuschwander and I am a first-year Starker Forests intern. Although I am a second-year natural resources major at Oregon State, I really enjoy learning about the forestry industry because of how large a role it plays in our economy, and in how natural resources can be managed.

On Monday I found two more sheds that were around one foot from each other. So far, I am in the lead for sheds this summer with a total of three. Although we have not seen any wildlife, besides three very large squirrels this week, deer bones were near o 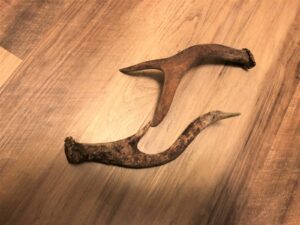 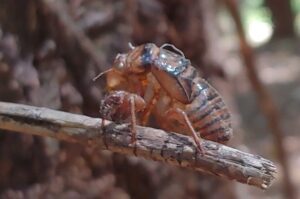 Yesterday, a molt of a cicada was found. At first Justin and I thought it was a queen bee, but after showing it to Fred he said it looked like a cicada molt. I was not stung this week, but after an incident with a rogue bee on Friday I have been much more cautious around possible nests and rogue bees. Justin was stung several times in one day, and Kaia was also when she was with us.

In my mental notebook I have written that the largest diameter I have recorded was an 87-inch Douglas Fir. In a three-plot stand, there was one massive tree with a broken top that was on the edge of the stand facing a field. Surprisingly, the tree was fairly easy to measure, compared to other large trees I have measured. Earlier in the day I measured a 53-inch big leaf maple that was much harder to wrangle due to the multiple offshoots that could have been their own trees. The 87-inch tree had offshoots much further up that looked like old leaders from when the tree broke at the halfway point.

At Starker Forests, I have learned about the inventory side of timber management through stocking surveys and timber cruising. In the new property, Euchre Mountain, although it is brushy, the 12-year-old in me is excited to go to work every day. Out there, there are plenty of signs of bear, elk, and deer. Additionally, there are some spots where blackberries and thimbleberries are in season, and where foxglove is being pollinated by bumblebees.

Climbing though salal and over massive logs while witnessing nature in its beauty really makes the days fly by, and makes each day something different and new to experience. Today, we did not see any animals, but we did see a torn-up stump, and several gashes on trees that belong to bears. Several small birds chattered near us at one plot, and when my partner chattered back to them it appeared that they were having a lovely conversation. In the stand we were working in today, the brush was not terribly difficult to fight through, but there were several times when we found ourselves facing a wall of salal or sword fern. Luckily there were not too many sitka spruce in the plots we ran today, but several of their prickly branches caught my arms and legs. 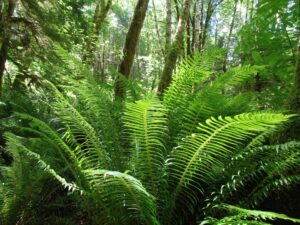 The weather was very temperate all day near the coast. The cloud cover, and canopy cover allowed me to keep my sweatshirt and long sleeves on all day for extra protection against branches and berry vines.

Hi, my name is Ellen Luedloff I’m 21 and am entering my first year of pro-school. This is my first summer interning with Starker, I have nev 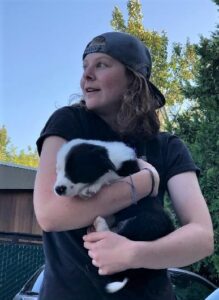 er worked in the forestry field before and am very excited to learn useful skills and knowledge to help me in the future.

In my free time I love to read, hike, camp, and snowboard in the winter. I like to take every opportunity to get outside and to be able to find a career that lets me do that is a dream come true.

Here are a few of my experiences and finds over the last few weeks: 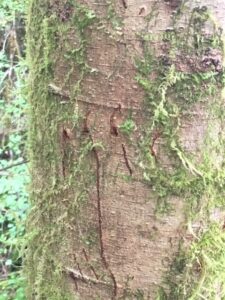 Today while cruising, I found these bear marks in a tree near a stream. We found evidence of a bear living in the unit we were working in, lots o 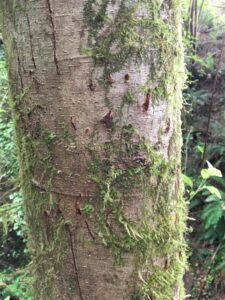 f crushed berry bushes and bear dung. Unfortunately, we weren’t able to find the bear but these claw marks are the next best thing. Make sure when out hiking, if you do come across bear marks or the bear itself, make lots of noise (black bears don’t like being surprised) so they know you are there and leave the area. The forest is their home, we just visit occasionally.

Today we found an older large stump with springboard marks in it. These marks are left from th 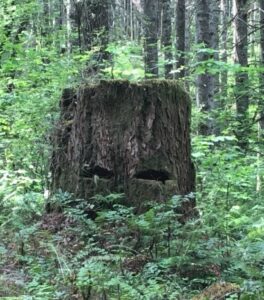 e last time this tree farm was logged around the 1940s/’50s. Loggers would cut these marks into the bole of the tree to hold springboards which they would stand on to cut the tree higher above the ground. 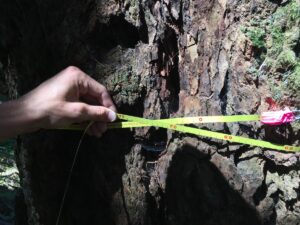 hese pictures show a tree that was about 70 inches in diameter! The tree is residual overstory that was left when the area was logged making it way bigger than the other trees in this unit and is the biggest tree I’ve measured so far. Due to its size, it is over 100 years old. 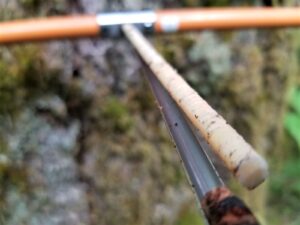 us to take out a small column from the trunk. We are able to count the number of rings and age the tree without harming it.

When I first saw this, I thought it was a type of fungus but it is actually a flower! Indian Pipe Flower to be exact. Unlike other plants it does not contain chlorophyll, making it white rather than green, this allows it to grow in darker areas of the forest.

*More to come as the days go by. 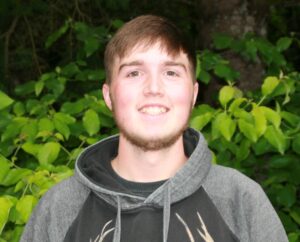 My name is Andrew Prom, and I am one of the 2020 summer interns at Starker Forests. This summer, we decided to start a blog by multiple members of the crew in order to allow everyone in the public to gain a little more information about exactly what Starker Forests does and what we, interns, are working on.

Going forward, I’ll dive deeper into what my summer working for Starker has looked like, but to begin, I’ll provide a brief background of myself.

Currently, I am going into my Junior year of college at Oregon State University to pursue a Forest Engineering degree. Part of my degree includes 6 months of work experience, so my Starker internship not only helps me gain knowledge and real-world experience but also serves as part of my degree. I am from Molalla, Oregon, and have lived there my whole life. Unlike some of the crew, I don’t have any family ties to forestry, however, my passion for the outdoors my whole life helped draw me towards this career path.

So far this summer, I have already learned so much working for Starker Forests, and I can’t wait to share more of what I have been working on with you all through this blog and answering any questions you may have.