Although last week was a four-day week, I made up for lost hours by working on fires.

On Tuesday, a few of us from Starker helped on a fire started by a fallen power line on the side of the road. The fire had been put out by the time we had arrived, but we spent the day mopping up the area. Luckily two streams were near the burned area and they were able to pump plenty of water to help the mop up process.

At first, we spent our time looking at hoses and winding some up. We also found hotspots near the edge of the road. I found a deer shed while doing this. This shed was my largest yet, and my fourth of the summer. 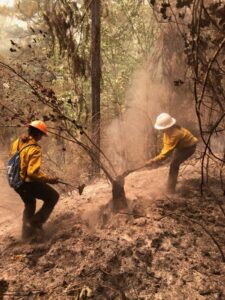 This mop up experience was much different from my later ones working with the rest of the remaining crew. This first experience was filled with a lot more learning than doing, but it was extremely helpful for later days.

Justin and I put water on flames on Wednesday when we were with the Dallas ODF office. Thursday and Friday were spent mopping up the Mill Creek fire that Justin and I had helped on the day prior.

This week is fairly empty because many of the interns have left for the summer.  We are down to four because Andrew was working on a fire. The smoke and ash aren’t horrible, but it still makes cruising a tad uncomfortable.

We remaining interns went with Lys to a pre-harvest cruise. The ash was the worst walking through ferns, but otherwise it wasn’t too bothersome. Later in the day, the smoke came back a touch thicker than the morning because the winds switched again.

Today in the morning looking back over the shop there were some blue skies and clouds. I am looking forward to blue skies consistently again, or at least true clouds and not the residue of lingering smoke.