Earlier in the week Justin and I found almost an entire cow skeleton. In the week prior, I saw part of a different cow skeleton in the same area. Additionally, on the road to the area we were brushing, a dry coyote carcass was on the edge of the road. The first day it was noticed, I peered at the jawbone of the coyote and saw how large the canines were compared to the rest of the body.

On Thursday, Justin and I went electro-fishing as part of a study for NCASI. It was interesti 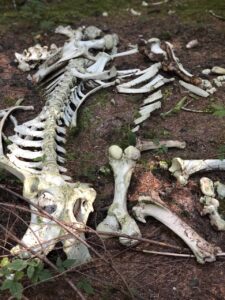 ng to learn how they collected fish, and the kinds of data they collected. During the first part of the day, we helped collect macro-invertebrates, and observed how they tested for salinity, oxygen concentration, and depths at intervals within the stream. Later, we helped collect the fish in nets and buckets after two machines shocked the water. After collecting fish from one section three different times, we watched as the species was named, and its weight and length was collected.

Two notable things we collected were a large rainbow trout (for a small stream) and a Pacific giant salamander. The salamander was around the size of my hand and was honestly quite cute. We also caught lots of coho, and lamprey. I was hoping to catch a Pacific lamprey, but instead we caught many more interesting fish.