Gary Springer, an integral part of Starker Forests from early 2003 to his retirement in fall of 2019, has left his mark upon earth with healthier forests and heartier friendships.

The late Barte Starker knew Gary would be great addition to the Starker Forests team because of his commitment to sound forestry practices and his knowledge about Oregon forest policy. 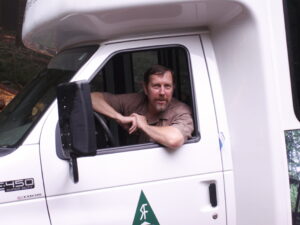 In recent years, many people remember Gary for always volunteering to drive the “Starker bus” for forestry field trips for both forestry groups and the public.

We at Starker Forests, Inc. will greatly miss Gary’s frequent visits, in spite of his being “retired.”

Heaven got a little goofier on May 25th when Gary Thad Springer of Corvallis, died peacefully with his daughters by his side. The son of Thad and Beverly Springer, Gary entered this world on October 4th, 1948 in Corvallis, but spent his childhood and most of his career in the woods of Harlan, Oregon. He excelled both in basketball at Eddyville High School and shenanigans, fondly reflecting many years later to his children about that time he pulled the fire alarm at school (but to be fair nobody has since been able to confirm this and it’s possible he created this story as a source of inspiration for their own high school shenanigans).

Gary graduated from Oregon State University in 1970 with a degree in Humanities and a concentration in Journalism, which he made good use of as he penned articles, emails and letters to the editor about sound forestland management. He had probably planned to do something more than that with this degree but he’d spent his summers during college working on the tree farm back home, and by the time he graduated, he realized there was no place in the world he’d rather be. In 1975 he married Anne Lloyd of Corvallis, and together they raised three perfectly amazing children in Philomath, Mandy, Morgen and Scott (one or more of them clearly in charge of writing this obituary). 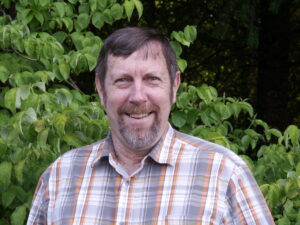 A career forester, Gary spent the first thirty years after college working alongside his dad, and for a time, his sister Diane, with their contract timber business Springer Logging. He took a special pride in working with his dad, a man he looked upon with reverence his entire life, so much so that he even forgave him that time he put a chainsaw through his shoulder! In 2003, Gary took a position at Starker Forests as a policy advisor who also managed public outreach. There he spent the final sixteen years of his career earning accolades and appointments he wouldn’t want us to mention, but will do anyway (and he’d certainly be rolling his eyes at how badly we will screw up the order of these things here in a minute). Here he made lifelong friends and truly cherished the years he spent with his Starker family.

After a long career of winning awards and serving on probably more committees than actually mentioned above, Gary amassed a huge collection of friends and family who came out in droves to show their support and love when they heard the news of his illness and then of his passing. If you asked any one of them how they would describe him, they would undoubtedly include the attributes intelligent and funny. And he was these things and so much more. But if we didn’t emphasize his humor here, we would not be doing this thing any justice. Gary was witty and a little weird and a lot hilarious. Rarely a day would go by without one of his daughters receiving an obscure/bizarre news article or fact of the day (Florida Man defrosting his Thanksgiving turkey in his swimming pool? Hard hitting news. International Warthog Day? Yeah, he knew that one, too.). He was inquisitive and curious, too. He loved geology and writing and shared both of these passions with his daughter Morgen. He loved photography, and especially loved taking pictures of his favorite places: Lincoln City and Arches National Park in Utah. Gary was a diehard OSU football and basketball fan and spent a whole lot of hours rooting for the Blazers as well. Sports was a passion he loved to share with his daughter Mandy and she will forever remember going to see these games live with him. He was also a huge music lover and he passed this love of music onto his children, as well as a penchant for smart assery, which they have no choice but to continue in his honor.

Gary is survived by his daughter Mandy Springer (Nicholas Borchers) of Stayton, daughter Morgen Springer (Sean Donovan) of San Ramon California, grandchildren Drew, Brooklyn, Parker and Brynnlee, and Ollie (grandog), father Thad Springer of Harlan, sister Sharon Springer of Corvallis, his niece Joey Wiseman of Newberg, his nephew Cole Ratliff of Bend, brother-in-law Lance Stein of Corvallis, his dear “Chain Gang” friends Jerri, Sarah and Barb, and countless other friends at Starker Forests, OSWA, and others all over Oregon. He is preceded in death by his son Scott Springer (2000), his sister Diane Stein (2016), and his mother Beverly Springer (2005).

A memorial service will be held in true Springer fashion at the park on the family property in Harlan later in the summer and his daughters will reach out to friends, family and colleagues in the coming weeks about that. We know we’ve left out a lot of awards and committees, so we hope to see you there to help fill in the blanks.

Dad, we tried to give you your Viking send off but it appears to be illegal in the state of Oregon. We promise to set fire to some of your ashes over a body of water at the very least. So goodbye for now, Dad. Thanks for a million memories and so much laughter. We will love and miss you always.

To plant trees in memory, please visit our Sympathy Store.