Hunting season for western Oregon deer is underway and we have been issuing many permits at our office. If you are hunting and driving on our lands, please stay on rock roads. Driving on dirt roads can damage the road surface and cause erosion that can degrade water quality in streams.

We are in the middle of our largest fall seedling planting effort in our history. Planting seedlings in the fall allows the roots to grow and develop before the tree goes dormant for the winter. We hope this allows for better growth of the seedlings in the following growing season. Crews can plant several thousand trees per day.

Starker Forests will be offering forest education field trips to over 500 elementary school students, teachers and parents this fall. These fun tours at our interpretive trail near Blodgett allow students to learn about trees, plants, wildlife and wood products. Bus expenses are paid for through grants offered by the Oregon Forest Resources Institute.

Starker Forests will begin advertising for our Chief Executive Officer position this month. Applications will be accepted in January 2017. See the Jobs section of our website for more information.

August 1, 2016
Beginning Friday, July 29, 2016, the West Oregon District will implement our Public Fire Restrictions (Regulated Use) across the district. Current, and predicted weather, are forecasted to continue drying out forest fuels. Natural curing out of other fine fuels will also accelerate this time of year. All of these factors are causing our fire danger levels to increase to a point that conditions will warrant these additional prevention measures.

We appear to be in a steady warm and dry weather pattern for at least the next week. Our indices are progressively moving towards increased fire danger levels. With that, the West Oregon District will go into fire season on Tuesday, July 5, 2016 at 0100 hours. The district will be at an IFPL-1 at that time. 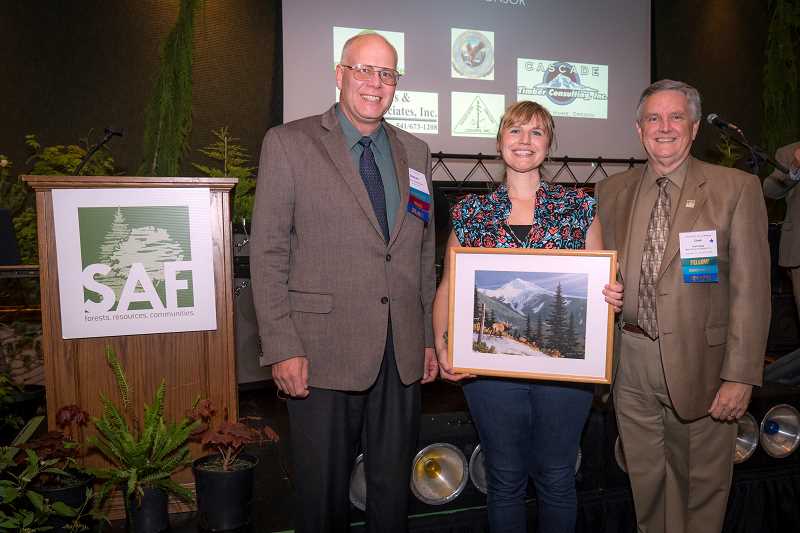 Hillsboro resident Fran Cafferata Coe has received the inaugural Young Forester Award from the Oregon Society of American Foresters (OSAF). The award is given to an OSAF member who has demonstrated outstanding leadership in the development and promotion of an individual program or project, or for a sustained leadership role benefiting the practice of forestry and the Society of American Foresters.

Coe graduated from Oregon State University with a bachelor’s degree in fisheries and wildlife science in 2000, with an emphasis in the interactions between forests and wildlife. She has more than 13 years of experience completing environmental surveys for sensitive, threatened and endangered plant and animal species.

For the last four years, Coe has contracted with the Oregon Forest Resources Institute, where she leads the Wildlife in Managed Forests program, which supports OFRI’s mission of elevating public understanding of how forest stewardship meets social, environmental, and economic needs of both present and future generations.

OSAF and its 15 local chapters represent all segments the forestry profession within the state.

For over 25 years, the Mudslinger bike race has been a hallmark April event on the Tum Tum Tree Farm. Mike Ripley has a new course to offer racers for 2016. We hope you all have a great time! Check out the Mudslinger page for more info.

Starker Forest has had a long history of offering free permits for recreation on our forestlands. In 2015, permits were issued for over 4300 recreation activities. We ask that permittees walk, run and bike on existing roads only.

Recently, we have experienced an explosion of unauthorized trail construction and use on our property adjacent to the OSU Research Forests near Corvallis. In particular, we have found multiple sets of trail building tools on our Alder Creek Tree Farm.

We have posted signs clarifying who owns the land and that the unauthorized trails are not ok and should not be built or used. The public is welcome to run and ride on existing roads on our properties with a free permit that is available at our office near Corvallis at 7240 SW Philomath Blvd.

According to Marc Vomocil, Vice President of Forestry, â€œWe encourage all kinds of recreation activities on the vast majority of our lands, but we do not want permanent trails built unless we are part of the process.â€

Starker Forests is working in partnership with the OSU Research Forests and Team Dirt, a local chapter of the International Mountain Biking Association, to identify places where legal trails can enhance the recreation experience and should be built. Currently, the only authorized trail on our Alder Creek Tree Farm is the â€œUpper Skillings/McCullough Peakâ€ connector that connects the OSU Research Forests 790 road to our road system immediately west of McCullough Peak.

Unauthorized trail building hurts the efforts of local trail advocates. Working with the landowner, as groups like Team Dirt have done, builds trust. Team Dirt, a nonprofit and volunteer organization, supports the stewardship of sustainable, multiple-use and purposed built trails, to preserve access for mountain bikers through advocacy and education, and to promote responsible trail use.

Unauthorized trails will be blocked with signs, flagging and forest brush to make it clear to users that use is illegal. Forestlands in Benton County are patrolled by the Benton County Sheriffâ€™s Office.

Starker Forests is a fifth generation family business that owns, grows and manages forests in Benton, Lane, Lincoln, Linn and Polk counties. Our primary business is commercial timber production. We are an active member of the American Tree Farm System.

Our 25th Annual Tree Planting Day was a huge success. Much of that may have had to do with the great weather but we know that the hot dogs and cocoa were a hit too.
We owe thanks to many volunteers that made the day so much fun. Thank you!

A look back at the beginnings of tree-planting day

Our very own Cameron Muir tells of planting in the same spot over two generations of kids and trees!
Video: The Next Generation of Trees – Tree Planting Day 2016

Tree planting day is fast approaching on February 6th. Our RSVP list is almost full and we anticipate 150 youth participants.

The most important items to remember are a shovel and raingear. Rubber boots for kids, along with gloves, a rain jacket and rain pants, if you have them. It is a great idea to bring an extra pair of shoes and a kitchen-sized garbage bag. When your angels return to the car, you can place all of the muddy, dirty gear into the bag before it destroy the inside of your car!

Tree Planting Day will be located near Blodgett, Oregon. It is a 20 minute drive from the Philomath High School, where we will all meet. After leaving a dual lane Benton County Road, you will be driving on single-lane forest roads for a total of about 3 miles. Note that there is a car wash on Philomath Blvd, near Safeway, if you need it on the return trip!

We want everyone to be safe and have fun. We will only cancel Tree Planting Day if there is dangerous ice, snow or wind. Rain will NOT slow us down!

The Oregon Dept. of Forestry issued this news release.

So, just how severe was Oregonâ€™s wildfire season this summer? About 838,000 gallonsâ€™ worth, according to Neal Laugle, the Department of Forestryâ€™s (ODF) aviation unit manager. Thatâ€™s how much liquid retardant the departmentâ€™s air tankers dumped on fires in 2015. And that figure doesnâ€™t include the thousands of gallons of straight water dropped by ODF contracted helicopters in close support of ground firefighting forces.

The window of opportunity in which to stop a new blaze from growing large has shrunk from days to hours, due to the extreme summer weather and forest fuel conditions. Fire managers with ODF and the fire associations increasingly rely on air power to even the odds, launching air and ground resources simultaneously, which often shaves response time to minutes.

ODFâ€™s contracted large air tanker can reach a fire quickly and deliver 3,000 gallons of retardant in a single load. This slows fire growth and buys time for fire engines and hand crews to arrive on scene and begin direct attack. Single-engine air tankers (SEATs) use their speed and maneuverability to box in a fire with multiple, smaller retardant drops. All told, air tankers logged more than 700 flight hours this summer. The agencyâ€™s helicopters put in 834 hours slinging water to hot spots with their cable-suspended buckets.

Fire aviation snapshot
Statistics currently available are for ODF– and fire association-protected lands west of the Cascades. This summer, most of the aerial firefighting took place east of the Cascades (86 percent), followed by southern Oregon (14 percent), and northwestern Oregon (less than one percent).

ODFâ€™s aggressive firefighting tactics can create an â€œairshowâ€ of multiple tankers and helicopters over an active fire. When the meter is running on all these aircraft, costs mount quickly. But stopping even one high-potential blaze from spreading to thousands of acres can save millions of dollars in the long term.

As an example, the 26,000-acre Stouts Creek Fire in Douglas County cost $37 million to extinguish. And that is just for suppression. Damage to the forest resource, which includes timber as well as fish and wildlife habitats, typically totals at least three times the firefighting expense.

No one can accurately predict the intensity of future fire seasons. But the current trend has the department, its partner resource agencies, and private forest landowners scrambling to meet the challenge. Aviation will undoubtedly continue to play a major role in Oregonâ€™s fire protection system in the years to come.