Another week brought about a whole new set of tasks for the summer crew.

During the heatwave that started last week, we began learning how to do stocking surveys.

For anyone not familiar with these, the goal is to take an inventory of saplings growing in replanted clear-cuts to see how they are doing. At Starker Forests, stocking surveys are done on 1, 2, and 4-year-old units, and inventory data is stored each time so it can be compared. As far as the actual data collection process, stocking surveys involve taking plots of 11.78-foot radius at predetermined locations in each unit. In each plot, you record the number of trees as well as noting their species, height, diameter, vigour and any damage done on them. After working as a group on a few units to begin the week, we were set free in pairs to continue performing stocking surveys for most of the week. 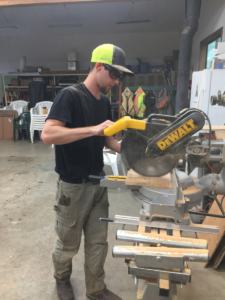 On Thursday, Jonathan (one of the other interns) and I got to work on a special project Starker Forests is involved in. After completing a few stocking surveys in the morning, we came back to the shop early to work on making nesting boxes for wood ducks. All the boards had already been cut to the right sizes, however, we were tasked with cutting out the entry holes on the front face of the box as well as small groves on the inside of the box. After I cut the entry holes out, Jonathan worked to make groves on the inside of the front face of the nesting boxes so once ducklings are hatched, their feet have little slots to climb out of the boxes. After the construction of the boxes is complete, they will be attached to posts in wetland areas to help protect nesting wood ducks from predators.

To close out the week on Friday, we completed fire training by digging a hand line around a unit that was clear-cut last year. Not only does this serve as good practice for our crew to train for an actual fire, it allows for the possibility of a broadcast burn being able to happen on that unit in the fall.

Though broadcast burning is becoming more and more rare, it is still used when possible at Starker Forests and is a very effective way to remove logging debris from harvested units and return key nutrients to the soil for the seedlings that will be planted there shortly after a burn.