Last Wednesday’s agenda included sectioning off 80 feet on either side of a riparian area. The riparian area required a larger buffer zone due 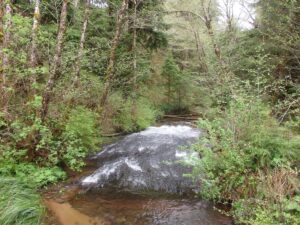 to salmon, steelhead, and trout habitat within the stream, and due the size of the stream. I followed the stream with a plot stick in tow as it held my white long-sleeve shirt as a flag. Justin measured slope distance from where he would stand above the stream to my flag to 80 feet. This process, though filled with salmonberry stickers, was fun.

While following the stream where the yearly high was, I saw some small fish, as well as a crawdad. Justin saw a large frog during the day as well. 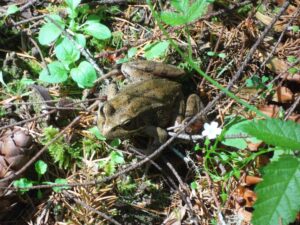 Thursday’s agenda was road brushing. An change of pace was nice because for the majority of the summer Justin, Cole, Wyatt and I have been timber cruising. Road brushing was more difficult than I anticipated because I was working behind Cole as a “swamper” for the majority of the day. (A swamper is the person who picks up cut brush and limbs to clear the road.) Cole was very quick and was very thorough, which left large piles of limbs that needed to be removed from the road and nearby areas. To put it bluntly, I was not prepared for the speed of Cole; however, as the day neared its end, Wyatt helped me catch up to Cole so that all brush that was limbed was cleared away.

Although today was hot and a bit more difficult than timber cruising, it was a nice change before diving back into measuring trees again on Friday.